Antananarivo is Madagascar’s capital, with around over 3 million people living in the city and surrounding peri-urban areas.

Poverty levels are high across the whole urban area. Around a third live in poorly constructed informal settlements, and more than one million lack access to adequate water and sanitation facilities.

In the city’s schools there is an average of one toilet for 71 children, compared to the recommended ratio of 1 for 25, and fewer than half of these toilets are gender separated. While around 93% of schools currently have toilets, 40% do not work due to lack of repair and maintenance.

Many of the challenges facing improvements to water and sanitation services in Antananarivo are environmental, including surface water contamination and soil erosion from deforestation.

Rainy seasons are particularly difficult when flooding destroys homes, displaces families and fills pits and tanks which causes them to overflow, contaminating the local environment and groundwater.

We’ve operated in Antananarivo since 2009. In this time, we’ve worked closely with the national water utility, Commune’s office and local stakeholders to build over 500 community water, sanitation and hygiene structures.

Before the creation of this water kiosk, we had to fetch water from a well, located far west of our community. It was not clean, so we either had to have the water treated or boiled before drinking. Now, thanks to this water kiosk, that problem is solved, and we have safe water nearby our home. 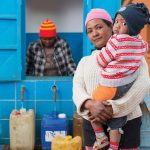 We’re working with JIRAMA to help reduce water loss caused by theft, leakage and inefficient billing and payment collections. We’re also helping JIRAMA regulate water pressure and control the flow. This will allow the systems to be better managed and increase the amount of water for customers, particularly those in low-income communities.

We’ve helped many residents in Antananarivo gain access to clean, secure and legal water by supporting the establishment of a low-income customer unit. We’ve also supported this team within JIRAMA and helped establish systems for payment collection. This has enabled JIRAMA to increase both its income and customer base.

In addition, WSUP is supporting the augmentation of water supply to the city, by supporting JIRAMA with the provision of specialist hydraulic equipment.

Community-managed water kiosks in low-income communities allow residents to buy convenient, safe and affordable water, and some communities have used their profits to build more kiosks. We support all of this through building the capacity of relevant partners, mobilising the community, helping establish a water user association, working with JIRAMA, and supporting a management contract with the relevant commune.

Community laundry blocks are playing a significant role in increasing women’s independence. Residents can collect water and wash their family’s clothes, and many women also use the laundry to earn extra money by offering a washing service to others. This increases their income and can make a big difference to the quality of life for the women and their families.

Community groups are also using revenues from water kiosks and other local sources to finance drainage cleaning teams, critical to public health. The initiative was set up in 2009 and has since spread across the city. 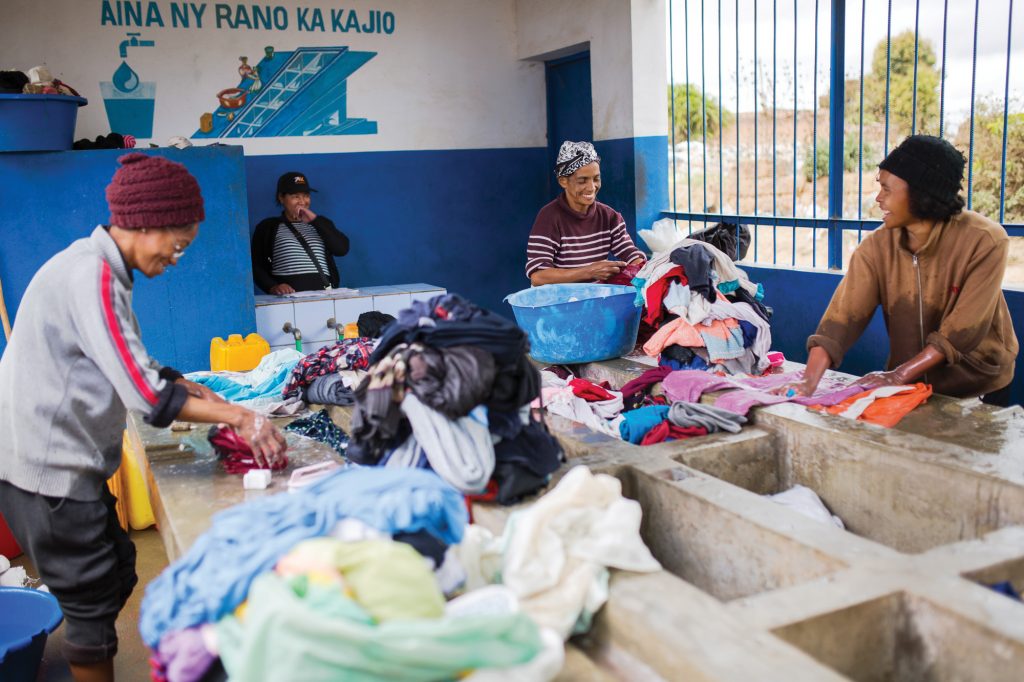 We have worked with 62 schools in Antananarivo where our interventions are much more than just toilets, also promoting institution wide behaviour change for improved hygiene practices and long-term operation and maintenance. Toilet design is an important part of the intervention and we are piloting ways to improve current designs, improving accessibility, facilitating dignified menstrual hygiene management and reducing costs.

Improving sanitation across the city

In 2017, we started to establish a supply chain for locally produced concrete slabs and are trialling the introduction of new products to the market, working through community-based organisations and hardware stores. We’re currently piloting approaches to move household toilet construction into viable sanitation businesses.

We’re also working closely with Government and local actors to develop public-private partnership approaches for public shared sanitation, specifically how to scale it up in peri-urban areas.

WSUP is supporting the operation of a decentralized treatment site, including working to provide safe and effective pit emptying services in the local area.

WSUP support to enhance knowledge on the legal framework has strengthened our commitment and conviction to properly ensure our regulatory role for better WASH services in the Commune. 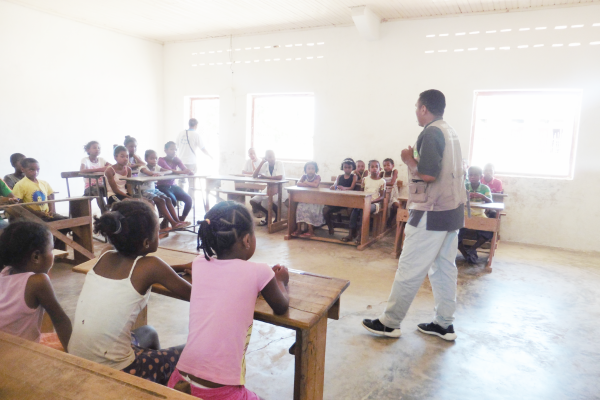