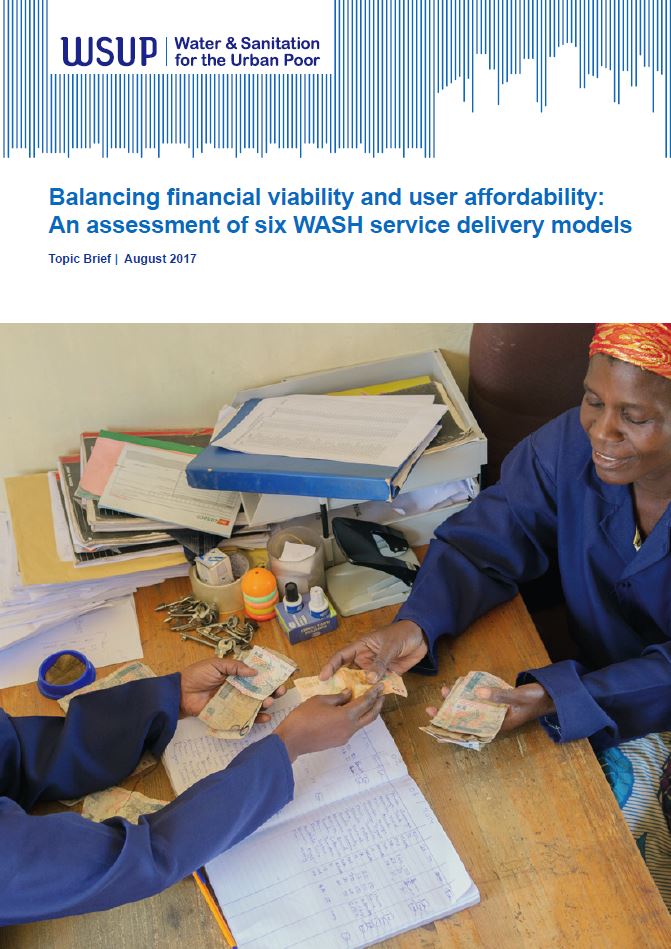 Each model has been developed in partnership with locally mandated service providers to facilitate sustainable, at-scale improvements to low-income urban populations.

Locating the appropriate balance between financial viability and user affordability is at the core of WSUP’s programmatic activities. The approach is characterised by a number of important nuances specific to the contexts in which WSUP and partner institutions operate: 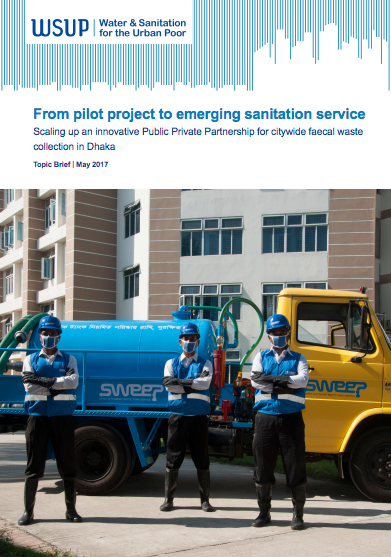 Dhaka is one of the world’s megacities, with a population of around 16 million.

The clear majority of residents (80%) are dependent on on-site sanitation systems, yet until recently, no private operator existed to provide mechanical emptying services to this vast and largely untapped market.

In 2015, a Public Private Partnership was established between Dhaka Water Supply and Sewerage Authority and a local small and medium sized enterprise aiming to bridge the service gap through a new faecal sludge emptying service – SWEEP.

SWEEP has now been operational for nearly two years, establishing itself as a viable business and becoming profitable five months after its launch.

This Topic Brief looks at the SWEEP initiative, the lessons learned, and how the business can now be scaled up across Dhaka and Bangladesh. 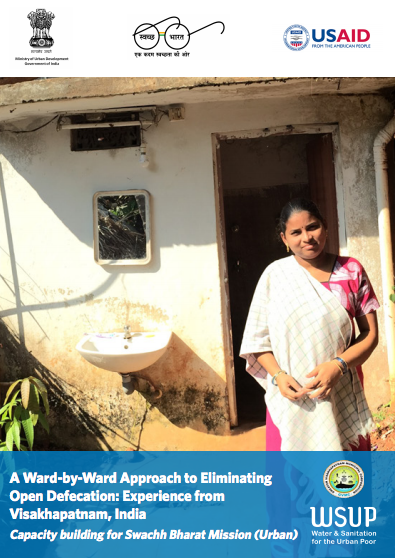 The Government of India launched the Swachh Bharat Mission (SBM) in 2014 with the ambitious aim to ensure hygiene, waste management and sanitation across the nation by the 150th anniversary of Gandhi’s birth in October 2019. This document aims to build on existing knowledge by detailing how the challenge of achieving universal sanitation and Open Defecation Free (ODF) status has been approached by Visakhapatnam in Andhra Pradesh, presenting nine stepping stones which together constitute a pathway towards citywide ODF status. 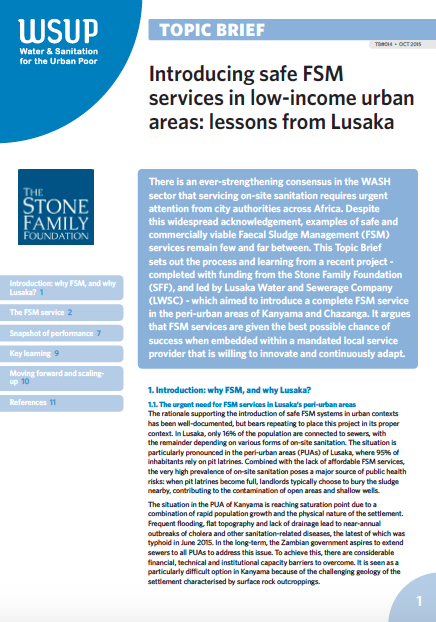 Despite the acknowledged importance of on-site sanitation, examples of safe and commercially viable faecal sludge management (FSM) services remain few and far between. This Topic Brief sets out the process and learning from a recent project – completed with funding from the Stone Family Foundation (SFF), and led by Lusaka Water and Sewerage Company (LWSC) – which aimed to introduce a complete FSM service in the peri-urban areas of Kanyama and Chazanga. 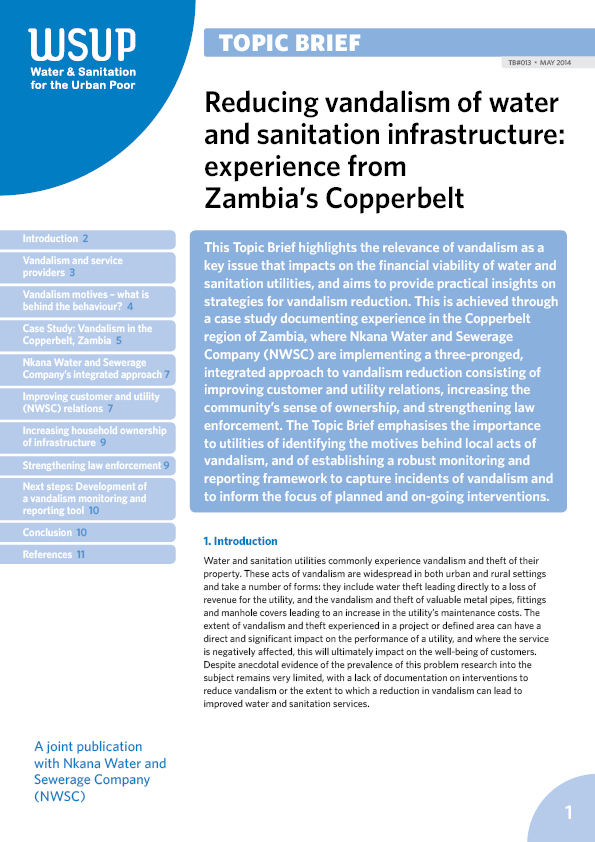 This Topic Brief highlights the relevance of vandalism as a key issue that impacts on the financial viability of water and sanitation utilities, and aims to provide practical insights on strategies for vandalism reduction. 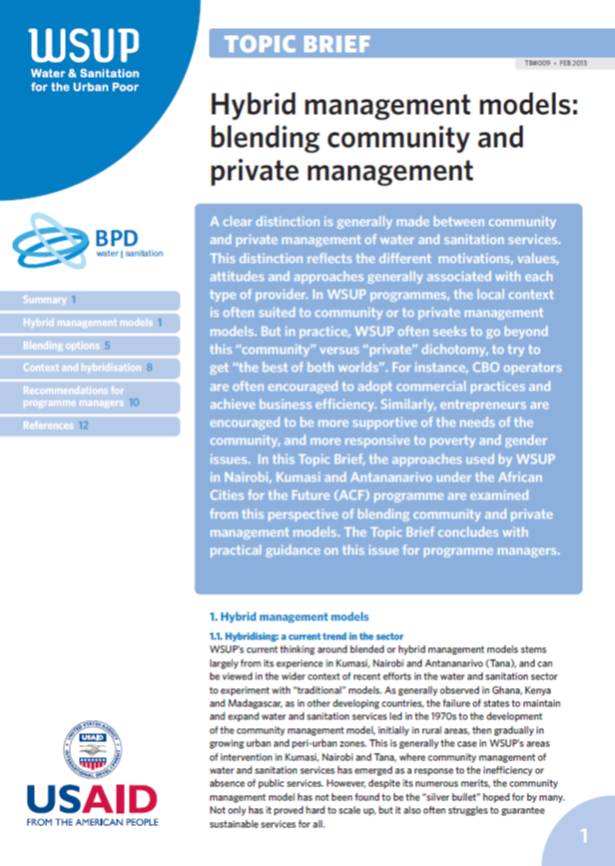 A clear distinction is generally made between community and private management of water and sanitation services.  For example, entrepreneurs who provide services are assumed to hold very different motivations, values and approaches to Community Based organisations (CBOs). WSUP often seeks to go beyond this “community” versus “private” dichotomy, to try to get “the best of both worlds”. In this Topic Brief, the approaches used by WSUP in Nairobi, Kumasi and Antananarivo under the African Cities for the Future (ACF) programme are examined from this perspective of blending community and private management models. 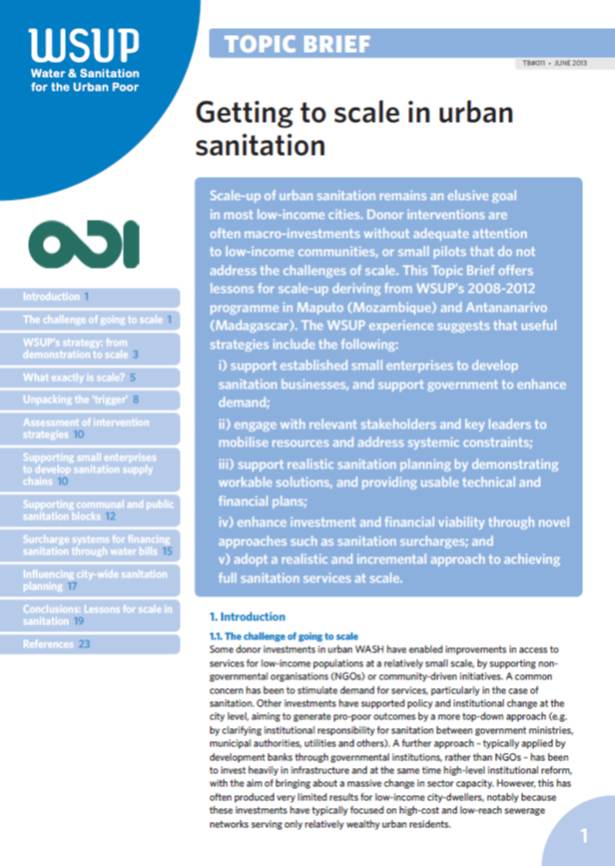 Scale-up of urban sanitation remains an elusive goal in most low-income cities. Donor interventions are often macro-investments without adequate attention to low-income communities, or small pilots that do not address the challenges of scale. This Topic Brief offers lessons for scale-up deriving from WSUP’s 2008-2012 programme in Maputo (Mozambique) and Antananarivo (Madagascar). 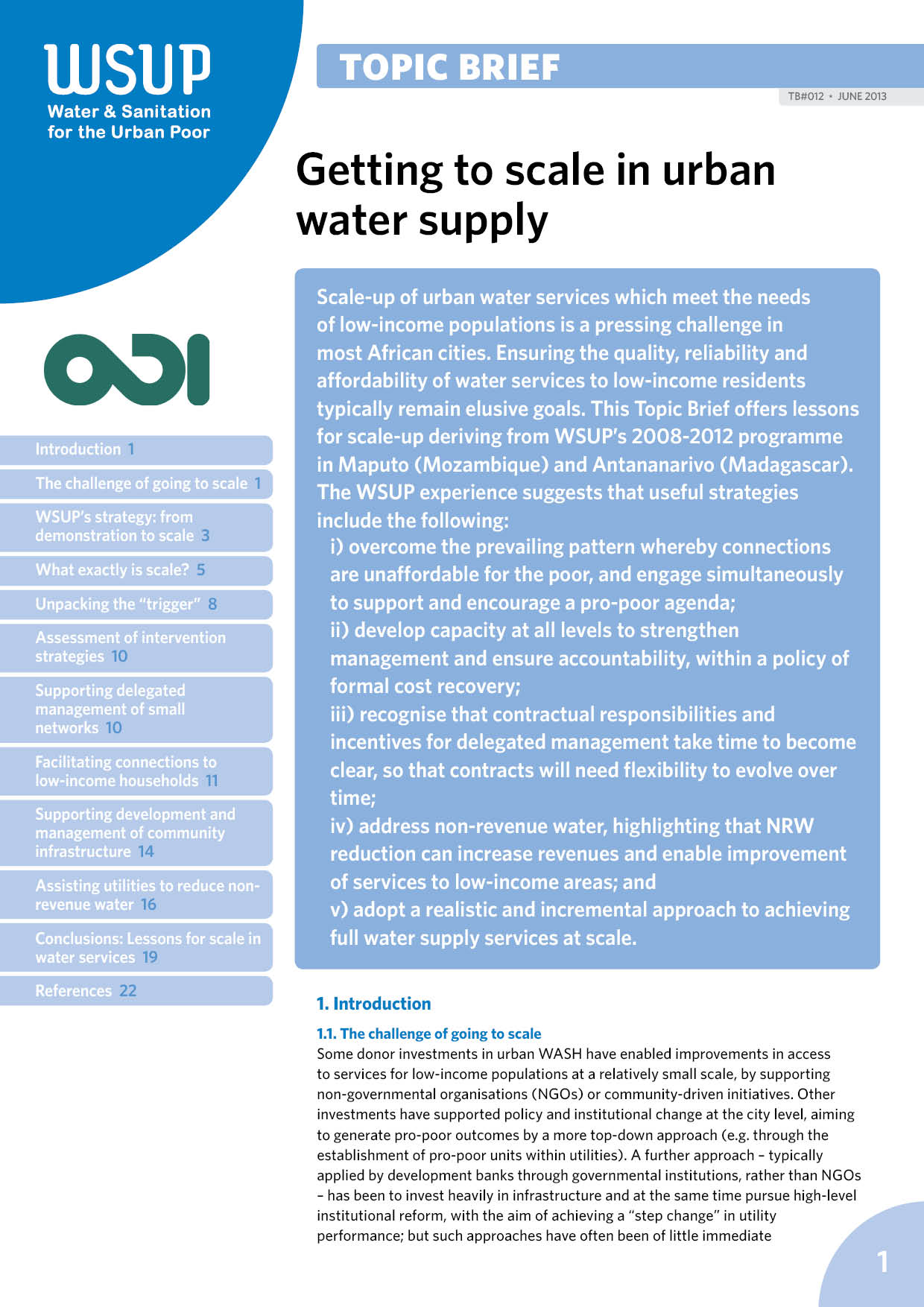 Scale-up of urban water services which meet the needs of low-income populations is a pressing challenge in most African cities. Ensuring the quality, reliability and affordability of water services to low-income residents typically remain elusive goals. This Topic Brief offers lessons for scale-up deriving from WSUP’s 2008-2012 programme in Maputo (Mozambique) and Antananarivo (Madagascar). 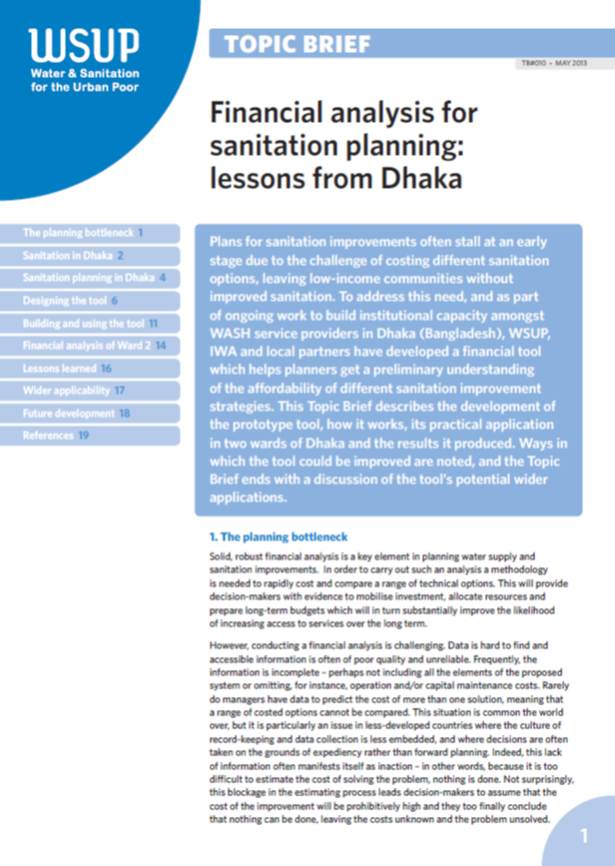 This Topic Brief describes the development of the prototype tool, how it works, its practical application in two wards of Dhaka and the results it produced. Ways in which the tool could be improved are noted, and the Topic Brief ends with a discussion of the tool’s potential wider applications. 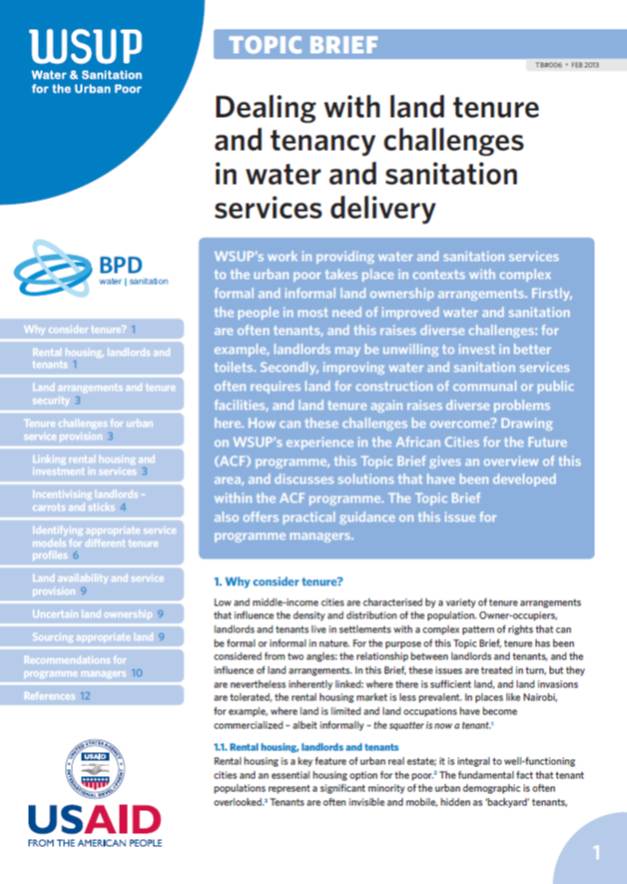 WSUP’s work takes place in urban contexts with complex formal and informal land ownership arrangements, raising diverse challenges for water and sanitation service provision. For example, the people in most need of improved water and sanitation are often tenants, yet landlords may be unwilling to invest in better toilets. Similarly, improving these services often requires land for construction of communal or public facilities, raising the issue of land tenure. Drawing on WSUP’s experience in the African Cities for the Future (ACF) programme, this Topic Brief gives an overview of these challenges and discusses possible solutions.