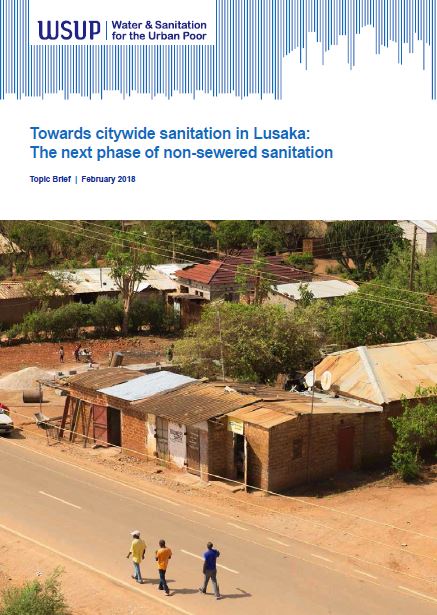 Lusaka has made huge strides in introducing faecal sludge management (FSM) services for low-income consumers, particularly thanks to the efforts of the city’s utility, Lusaka Water and Sewerage Company (LWSC).

WSUP has worked closely with Lusaka’s water and sanitation stakeholders, including LWSC and Lusaka City Council (LCC), for a number of years. In particular, LWSC and WSUP have worked together to provide improved on-site sanitation facilities and FSM services to lower-income peri-urban areas (PUAs) of Lusaka.

Thanks to funding from Bill & Melinda Gates Foundation (among others), LWSC has been able to improve sanitation access in a number of PUAs with WSUP’s support, using context-specific service delivery models, tools and guidelines that have contributed to the strengthening of the urban sanitation sector as a whole.

The advent of the multi-million-dollar Lusaka Sanitation Program (LSP), led and implemented by LWSC and funded by international donors such as the World Bank and African Development Bank, provides an opportunity to consolidate and scale up the positive FSM pilots and small-scale projects in operation across Lusaka.

This publication examines sanitation and FSM in Lusaka as the LSP begins, and how LWSC and WSUP’s experiences in the city so far are contributing to the LSP as Lusaka moves towards citywide improved on-site sanitation and FSM service provision.