What can we learn about the race to SDG 6.2, and can research accelerate results?

However, a lack of urban infrastructure is clearly holding these countries back. Studies estimate, for example, that the economic output of Bangladesh’s mega-city, Dhaka, falls short of what would be expected for a metropolitan area with its population density, mainly due to limited infrastructure. Considering sanitation alone, only 53%, 18% and 35% of urban dwellers in Bangladesh, Ghana and Kenya respectively have access to basic sanitation, according to the JMP. Data on access to safely managed services is still scarce and only available for some cities: in Accra and Kumasi in Ghana, 72% and 43% respectively of the sludge produced ends up untreated in the environment. In Dhaka only 0.3% of sludge and wastewater is effectively treated.

Rapid urbanisation has also brought its own set of challenges: an estimated 46% and 36% of Kisumu and Nairobi residents (in Kenya) live in informal settlements. In these densely populated settlements with limited access to networked-based water services, conventional sanitation solutions (i.e. large diameter sewers) are difficult to implement. High tenancy rates (exact figures are scarce), transient populations and “informal regulation” by local leaders (imposing, for example, informal taxes on local businesses) add to the challenges of developing inclusive urban sanitation services.

Looking at the scale of the needs and the constraints of urban settings, achieving universal access to basic sanitation by 2030 – let alone increasing access to safely managed services – seems overly optimistic. Unless certain basic requirements fall into place quickly, some countries will find themselves still trailing behind.

The scoping studies commissioned by WSUP have highlighted a number of gaps related to the policy environment as well as institutional and financing arrangements for the urban sanitation sector, which need to be addressed if fast-track progress towards the SDG is to be achieved.

First, although policies that highlight the need to deliver sanitation services for all do exist, actionable bottom-up strategies – ideally feeding into a national master plan for urban sanitation – are still missing. In Ghana for example, local government plans for sanitation (so-called DESSAPs) are mainly focused on solid waste and do not provide a concrete roadmap towards sanitation services for all. Consequently, national policies fail to be embraced at local level and efforts from the different actors in the sector remain disjointed and uncoordinated.

Linked to the above, national institutions lack clear mandates to take the lead in providing inclusive sanitation. If sanitation services are to be delivered at scale, national institutions have a major role to play, especially in providing technical assistance to local governments on how to extend services to low-income residents: for example, setting standards for urban sanitation infrastructure, overseeing works, and designing and supporting the tender of contracts for faecal sludge management. The creation of a Ministry of Sanitation and Water Resources in Ghana and a new regulatory framework for faecal sludge management in Bangladesh are steps in the right direction. National stakeholders believe research can make an important contribution to these reforms: as a result, WSUP expects to commission multiple studies in the area of institutional frameworks and capacity, including an international comparative study of models for Ghana’s proposed National Sanitation Authority (NSA) at the request of the new Ministry.

Crucially, governments and local governments do not allocate sufficient funds toward sanitation, particularly to pro-poor urban services. In Bangladesh, most government funds have been allocated to financing CLTS in rural areas. In Ghana, preliminary results from the latest TrackFin exercise revealed that government funding to sanitation did not surpass USD $11.3 million in 2014 – by comparison households’ contribution to the sector amounted to USD $213 million in that same year. There is little data on the allocation to sanitation by newly devolved counties in Kenya, but sanitation is unlikely to be at the top of their priorities. In the context of highly decentralised countries like Ghana and Kenya, clear directives to local governments on acceptable levels of expenditures for sanitation are essential if local funding allocations for sanitation are to be adequate. Research looking at innovative public finance mechanisms for sanitation, part of WSUP’s new Research Initiative, could help to drive progress in this area (for example, a potentially influential study looking at consumer willingness-to-pay a pro-poor sanitation surcharge, now nearing completion in Kenya). A planned three-country study looking at financing requirements for pro-poor sanitation services in Bangladesh, Ghana and Kenya could further strengthen the case for increased allocations.

In addition, most policies recognise the role of the private sector in developing sanitation services; however, mechanisms to professionalise pro-poor sanitation services (often performed by informal operators) and to attract or facilitate private sector participation are quasi-non-existent. When present, private sector participation is still at the testing stage, as in the WSUP-supported SWEEP initiative in Dhaka and Chittagong. In order to scale-up, such efforts need to be supported by favourable policies: for example, upstream by providing large-scale capacity building services to existing or potential operators, and downstream by introducing financial incentives to enterprises providing sanitation services. This underpins the rationale for context-specific projects aimed at supporting sanitation business and market development in Bangladesh, Ghana and Kenya, a key area of focus for the Research Initiative.

Finally, a major bottleneck is the lack of implementation and enforcement of urban planning policies and environmental regulations, which exist in all three countries. The result is an ever-expanding unplanned urban space and a proliferation of unfit housing, both of which throw up challenges for improving urban sanitation services. WSUP’s Research Initiative will explore related issues in each of the three focus countries, beginning with a project in Ghana, now nearing completion, which examines smart enforcement models for the provision of compound sanitation in low-income urban areas.

“Rien ne sert de courir, il faut partir à point”, says a French proverb; the English equivalent is “Slow and steady wins the race.” If countries do not get the basics right, no matter how fast they run towards 2030, it is unlikely that they will achieve their ambitions to deliver sustainable sanitation services for all. 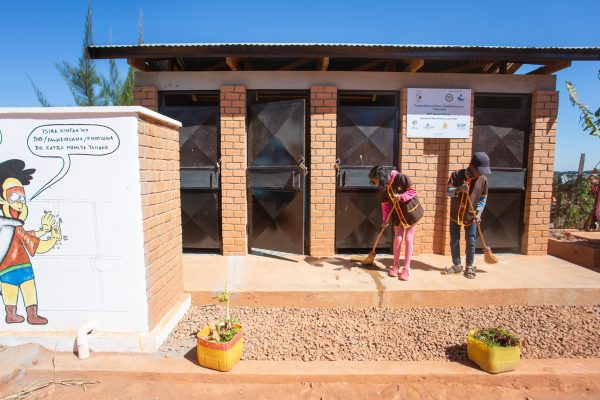