In a previous blog post back in January, we described the start of a research project which is aiming to assess and  model how faecal pathogens move through the environment in a low-income urban community in Dhaka in Bangladesh.

By Guy Norman, WSUP’s Director of Research and Evaluation

It’s one of our three biggest projects under WSUP’s Urban Sanitation Research Initiative, and it’s important research which we hope will help us to respond to some key practical questions. For example, are septic tank outflows to surface drains a major source of pathogen release and subsequent human exposure? If so, that calls into question the appropriateness of septic tanks in densely-populated parts of Dhaka and similar locations.

This project is being delivered by a team from the Institute for Sustainable Futures of the University of Technology Sydney (ISF-UTS), the International Centre for Diarhoeal Diseases Research Bangladesh (icddr,b), and the Center for Global Safe Water, Sanitation, and Hygiene at Emory University. The team is headed up by Professor Juliet Willetts of IFS-UTS, Dr Mahbubur Rahman of icddr,b, and Professor Christine Moe of Emory.

The research is looking at a low-income urban community in northern Dhaka. Data collection is now well-advanced. Essentially what they’re doing is analysing samples from lots of locations (septic tanks, septic tank outflows, surface drains, etc.), combining that with existing and new data on ways in which humans are exposed to pathogens in the environment, and using this to build a computer model that will help to assess the relative effectiveness of different possible types of future sanitation improvement. (OK, it’s a bit more complicated than that… but hey, this is only a blog post, for a detailed explanation you’ll need to wait for the eventual research articles!)

Certainly there are good reasons to suspect that septic tanks are a big health hazard in Dhaka. A proper septic tank should discharge its liquid effluent to a “soak pit”: a sort of gravel pit through which the waste gradually percolates and is part-treated before being released into the soil (which itself acts as a further treatment barrier). But in Dhaka, septic tanks generally discharge directly to the surface: in fact we probably shouldn’t even call them “septic tanks”, they’re really just a sort of crude holding tank that (at best) retains the heavier solids. Below is a photo of researchers Dr. Pengbo Liu from Emory University and Raju Ahmed from icddr,b collecting samples from one of these outflows, and it’s not a pretty sight: 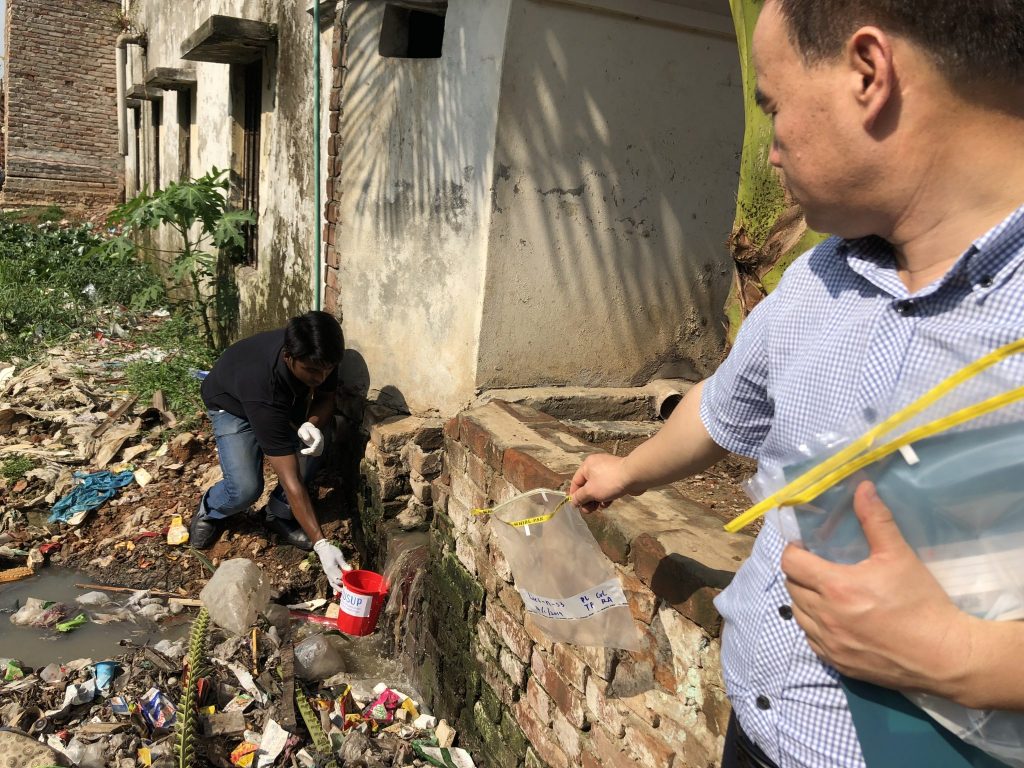 Are pathogen levels in these outflows dangerously high? Probably: but we don’t know for sure yet. The researchers have completed dry-season sampling, and wet-season sampling is now underway. Lab analysis of these samples is ongoing in Dhaka, but shipping delays in moving specialist lab reagents from the US to Bangladesh have created some frustrating hold-ups. Initial analyses of the dry-season samples (mainly drain samples analysed so far) have indicated near-universal presence of norovirus, and – alarmingly – more than 60% of samples to date have tested positive for the cholera pathogen Vibrio cholera. But it’s too early to say anything definitive about these results, and so far only a small number of septic tank effluent samples have been analysed. And of course it’s not just about pathogen levels in that outflow: where does that filthy water go next, and how likely is it that children will come into contact with it?

Technical complexity and shipping delays are not the only problems the researchers are battling with. They’ve also had issues with bulldozers! The community they’re looking at comprises about 3,500 people living in four streets. One of those streets was of particular interest, because it had a system of small-scale wastewater treatment facilities (anaerobic baffled reactors, ABRs) to which the street’s household toilets were connected. So it was interesting to compare this street with the adjacent streets, which had Dhaka’s habitual surface-discharging septic tanks, or toilets discharging directly to drains. A week before sampling commenced, a researcher from ISF-UTS visited: only to discover that the ABRs had just been bulldozed, to make way for a new drain the municipality had decided to put in. Oops! Nevertheless, the researchers decided to stick with this location, and are looking instead at ABR outflows in another nearby location.

Nothwithstanding these little hiccups, the research is proceeding well, and we’re confident that the work will be completed on schedule by March 2020. The researchers have run a household survey (about 375 households) and an infrastructure assessment in the study location. This has helped them to build the model of pathogen flow pathways in this community, so that different prospective sanitation improvement options can be compared. Initial model predictions for faecal indicator levels are so far looking in the right ball-park, which is encouraging. But let’s not count any chickens just yet!

Blog written by Guy Norman (WSUP Director of Research and Evaluation), with thanks to Juliet Willetts (ISF-UTS) and Christine Moe (CGSW, Emory University) for their inputs.