In Visakhapatnam (Vizag), on India’s eastern coast, women have taken a leadership role in a citywide drive to clean up the city and eliminate the practice of open defecation.

The campaign sought to harness the potential of women’s community groups, such as the 23,000 self-help groups in the city, as an existing, well-functioning structure that could enable change to make communities healthier and cleaner.

Thanks in part to the women of Vizag, and after ward-by-ward approach successfully implemented by WSUP, the city was declared open-defecation free in November.

This International Women’s Day, in line with the theme, ‘Be bold for change’, we profile four of these women changemakers: 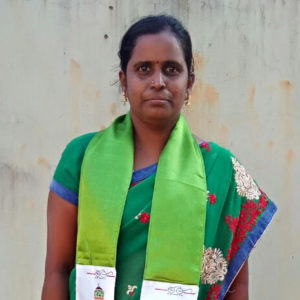 K. P. Gowri: The first stage in the project was to map open defecation patterns across the city, to understand where action needed to be prioritised.

K. P. Gowri took a lead in conducting a survey in her ward, interviewing households to identify how much people use toilets and reasons why they might not use toilets.

“With the survey, we identified that most of the houses have toilets, and most of the elders in the community are suffering with arthritis problems, so face difficulties utilising Indian-style toilets,” says K. P. “So, we suggested using western style and handlebar toilets. We have also identified some people going to openly defecate, and we gave counselling to those people. Now there is no open defecation in our ward.” 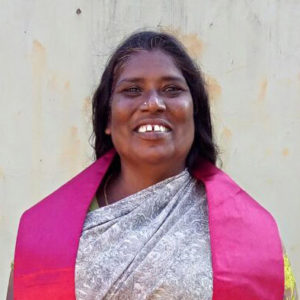 Rekha Jyothi: In March 2016, Rekha signed up to a Coordination Committee in her ward, to assist in the move towards eliminating open defecation.

“We wanted to make our ward clean,” says Rekha. “We recognised that there were three areas in our ward where people were going to defecate in the open. We helped in the construction of toilets, and we constructed rallies in the ward to raise public awareness about using the toilets. We also cleaned the open defecation areas and planted trees.” 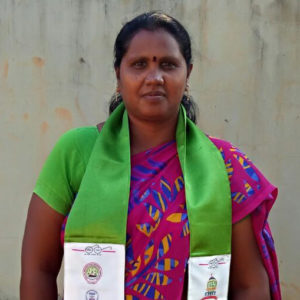 M. Jyothi: The Sadhimpu committee consists of highly respected female members of the local community, who have the standing required to influence the behaviours of those around them. WSUP identified that Sadhimpu could be powerful agents of change in persuading households to invest in toilets and stop practicing open defecation.

M. Jyothi was one of the women patrolling open defecation hotspots in her ward. “There were three places in our ward where around 200 people used to go to defecate. My role was to monitor these places and educate people on why they should use toilets in their houses.” 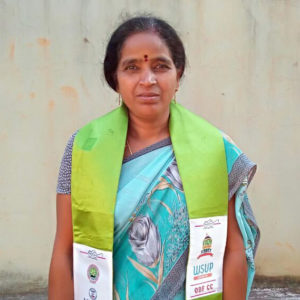 K. V. Ratnam: Constructing the thousands of toilets required in Vizag was expensive – but through bulk ordering of materials, communities were able to reduce the cost of the investment. K. V. Ratnam was one of the women involved in this exercise, coordinating a bulk purchase of sand, bricks, cement, and materials for the septic tank for 20 toilets in her ward.

“We were able to reduce expenditure by purchasing sand, cement, and bricks in bulk quantities,” she says. “I have learned that anything can be achieved if women work collectively.”

Read more about our approach to gender.

Our work in Vizag is implemented by WSUP Advisory, which provides technical assistance to those seeking to improve water and sanitation services to low-income urban customers around the world.

For more information on our work in Vizag, read our new report: ‘A Ward-by-Ward Approach to eliminating open defecation’. The report presents a nine step process which together present a pathway towards achieving citywide open defecation free status: 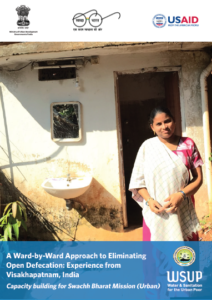 Having supported the GVMC to eliminate open defecation, in 2017 WSUP’s focus shifted towards improving coordination of the collection and treatment of human waste, as well as ensuring that the city maintains its clean status.

This second objective is being achieved through the maintenance of new facilities and improved hygiene practices, to ensure that the greatest health benefits are gained.

Our work in Vizag is part of the Indian government’s Swachh Bharat Clean India Mission and funded by USAID.

Read more about our work in India.